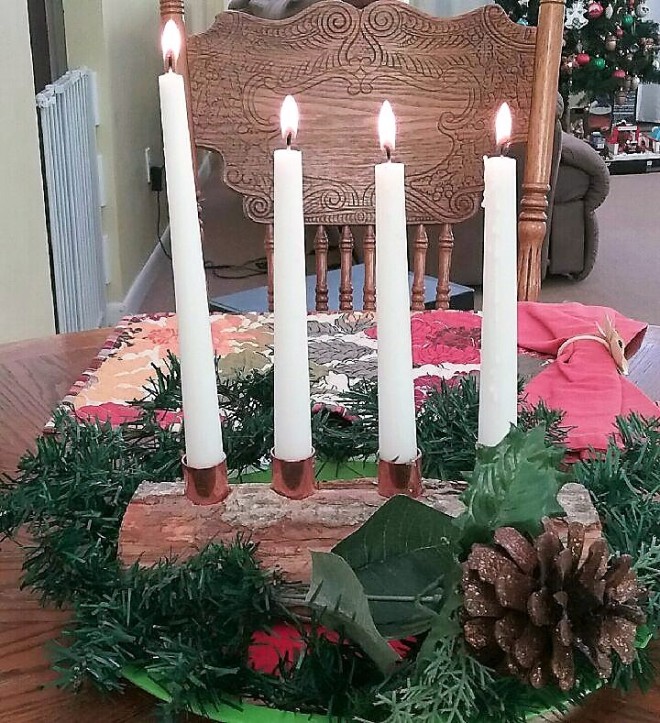 If you are feeling the after-Christmas let-down, it’s okay to keep singing the carols, looking at the lights, and watching the Hallmark movies (haha). According to the liturgical calendar that is used in many Christian churches, Christmas is really celebrated until epiphany on January 6. That’s the day that commemorates the wise men visiting Jesus. Even though I never grew up with the liturgical calendar myself (I have always gone to independent churches), I have enjoyed observing the holiday season that way this year.

I ordered my family a rustic candle holder from Germany on Etsy. When I say rustic, I mean rustic. It is wobbly, and someone could get a splinter from the bottom. I thought about sending it back because the workmanship was, ahem, poor. Then I decided to just put some candles in it and use it for Advent anyway. That wonky candle holder really grew on me as my family gathered around it each evening to light candles, read a small Bible passage, and say a prayer every evening of Advent, from December 2 to 24 this year. I used all white candles instead of the three purple and one pink that are more traditional. As Christmas approached, the candle holder started looking pretty to me. Then I realized: Jesus himself was placed in a manger when he was born. That was not fancy either, but it was just right in the grand design of things.

When it was getting close to bed time, we would have my son open a window on our German-style Advent calendar. I like to incorporate some German traditions into our celebrations since I have some German heritage. Then we would gather around the little wonky candle holder. My son would repeat back parts of the short prayer, and then he would do his favorite part: blow out the candles! Since he’s only five, observing Advent this way really helped my son understand when Christmas was going to arrive and what we would be celebrating. Honestly, it was something I looked forward to every evening myself. It made the season feel special, and it was a peaceful way to end each day. 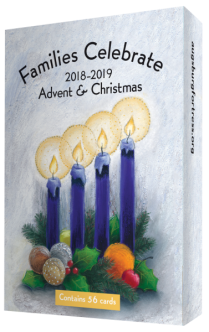 We are going to continue lighting the candles and saying a prayer until January 6. This a link to where we got our prayers and readings (the cards are sold out this year, but I would guess it will be available again next year). If you have never heard of this tradition of observing Advent and then celebrating Christmas for an extended time, it’s really not too late to get into it. We are going to celebrate Christmas for 12 days. We will sing carols, light the candles, say special prayers as a family, and really appreciate the decorations and the spirit of the season. I am still thinking about how I will commemorate this in my Journaling Bible. I definitely will do some kind of Bible Journaling about it because this really has been special for us.

Exploring the Christmas story this year, Elizabeth stood out to me in particular. She waited so long for something, prayed for it often, and then gave up — and that’s when God said it was not too late. His timing was different and unexpected, but the timing was right for John the Baptist (cousin of Jesus) to be born of Elizabeth. John prepared the way for Jesus. If you’ve never thought much about Elizabeth, check out this sermon about her. It is an excellent sermon!

On a lighter note (and going back to the Hallmark movies, lol) my favorite television Christmas movie was not even from Hallmark. It was from Lifetime. It was called A Very Nutty Christmas; it was hilarious and heart-warming. A nutcracker comes to life in time to help a bakery owner (Melissa Joan Hart) get into the holiday spirit. Check it out if you get a chance. My close second favorite television Christmas movie was A Shoe Addict’s Christmas. As with any Hallmark movie, the cheese factor was pretty high, but I love it.

Merry Christmas, and God bless you!